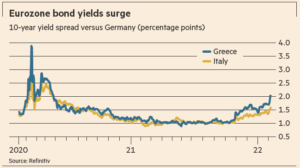 Investors are growing worried that if the European Central Bank signals too aggressive a tightening in monetary policy it could trigger the type of bond market tumult that worsened the eurozone debt crisis a decade ago.

Government debt across the currency bloc has tumbled since last week’s ECB meeting, when President Christine Lagarde declined to rule out the possibility of a rise in interest rates this year as the central bank battles record high inflation. For bond investors, that prospect is particularly concerning because the ECB has repeatedly stressed that it will wind down its vast bond purchasing programmes before lifting rates.

“The ECB is the only thing that’s been keeping the bond market at bay and it is being forced into retreat,” said James Athey, a portfolio manager at Aberdeen Standard Investments.

Crucially, the sell-off has hit highly indebted countries — whose bonds have benefited disproportionately from ECB buying — hardest, widening the gap in borrowing costs between eurozone members. If the central bank hurries to the exit, investors may once again choose to focus on the daunting debt loads of Italy and Greece, worth around 160 per cent and 200 per cent of gross domestic product respectively.

These levels remain well below those reached during a powerful jolt of volatility in the early stages of the pandemic, let alone the heights scaled during the region’s debt crisis, when Greece, Ireland and Portugal received official bailouts and Italy and Spain came close to being shut out of bond markets.

Even so, the speed of market moves in recent days carries an uncomfortable echo of the upward spiral in yields a decade ago, when rising borrowing costs fed concerns over debt sustainability, leading to further selling of sovereign bonds.

“I think if the ECB rushes through the end of asset purchases, spreads could blow out further from here,” said Athey. “At some point, as we saw in the [euro-zone debt crisis], that can become a self-fulfilling prophecy.” The ECB last raised interest rates in 2011, a move that had to be swiftly undone as the eurozone headed into the most acute phase of its debt crisis. Some investors are hoping such experiences will remind Lagarde and her colleagues to move slowly.

“Exiting net asset purchases and raising policy rates increases the risk of financial accidents, especially as debt levels have surged during the pandemic and as many other central banks are tightening policy at the same time,” said Joachim Fels, global economic adviser at bond investing group Pimco.

“Given these risks, and mindful of the 2008 and 2011 episodes of ill-timed ECB tightening, cool heads and steady hands are still likely to prevail at the ECB. However, the risks of yet another policy mistake have clearly increased.”

Lagarde helped to stem the widening in spreads when she told the European parliament on Monday that the ECB’s tightening would be “gradual”. She hinted that reinvestments of maturing bonds held under the central bank’s €1.85tn pandemic era bond-buying programme could help to counter any move higher in borrowing costs.

While her tacit acknowledgment of the rise in bond yields is reassuring, such a policy is unlikely to be enough to counter a concerted sell-off in Italian or Spanish debt, said Antoine Bouvet, a rates strategist at ING. “The tools offered to guard against further spread widening lack in firepower,” he added.

Some stress Italian borrowing costs are way below where debt sustainability would be a concern. Italy’s average interest bill on outstanding debt is about 2.5 per cent. With 10-year yields at 1.87 per cent, Rome can continue to cut its average debt costs as it borrows, said Iain Stealey, international chief investment officer for fixed income at JPMorgan Asset Management.

With high nominal growth, a market-friendly prime minister in former ECB chief Mario Draghi and support from the EU’s €800bn recovery fund, Italy can withstand higher yields than it could a decade ago, according to Stealey.

“Italy is in a hugely different position,” he said. “Once the dust has settled you might say 2 per cent on the 10-year looked attractive.”

Still, the selling in bonds of Italy and its peers has been painful for investors who parked cash in riskier debt, safe in the knowledge the ECB would only very slowly unwind its massive stimulus.

“The ECB has had many plans to create inflation, but zero plans of what to do if they succeeded,” said Ludovic Colin, a senior portfolio manager at Vontobel Asset Management. “The euro area as a whole can withstand higher yields. The problem we have is how fast you get to it. For the ECB, this is going to be like trying to land a massive Jumbo jet in a storm without crashing.”

‘The ECB has had many plans to create inflation, but zero plans of what to do if they succeeded’