Surge in real yields inflicts blow on ‘everything rally’ 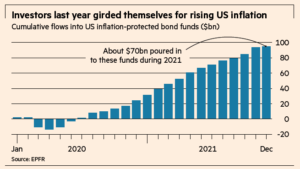 A jump in real yields, the return bond investors can expect once inflation is taken into account, has jolted markets in early 2022 and is behind a pullback in high-flying technology stocks, investors say.

The yield on 10-year inflation-linked US government bonds has risen 0.24 percentage points since the end of December to minus 0.86 per cent as investors position for the end of the Federal Reserve’s bond-buying programme and bet on interest rate rises from the US central bank this year.

The move has come at a time when investors have become slightly less anxious about high inflation over the coming decade despite US consumer price growth having reached a year-on-year pace of 7 per cent in December.

Expectations that the Fed will be able to keep a lid on inflation have helped temper the outlook, analysts said.

Real yields have risen more than yields on ordinary US Treasuries so far in 2022.

That means the gap between the two, which is known as break-evens and is a closely followed gauge of investors’ inflation expectations, has fallen slightly, from 2.60 percentage points to 2.58 percentage points.

In the bond market turmoil, investors say it is the rise in real yields that is most concerning for riskier assets, feeding declines in everything from stocks to bitcoin in a reversal of the “everything rally” during the pandemic when a collapse in real yields was linked to gains for assets of all stripes.

That logic is particularly painful for the highly valued corners of the equity market that have benefited most from very low interest rates.

The tech-focused Nasdaq Composite has suffered its worst start to the year since 2016, falling more than 3 per cent in the first trading days.

It has recovered somewhat in recent days, leaving it down about 6 per cent from the all-time high that it reached in November.

For lossmaking tech companies and businesses that went public only recently, the declines have been worse, according to closely followed Goldman Sachs indices.

Shares of non-profitable tech companies are down 7 per cent so far this year while initial public offerings in the past year have fallen roughly 9 per cent.

“Real yields tell you the true level of funding costs without hiding behind inflation, so we’re going to learn a lot about the genuine health of corporate balance sheets,” Shah said.

Research by Jim Reid, a Deutsche Bank analyst, shows corporate credit spreads — the extra yield investors demand a company pays to lend to it compared with the US government — have become increasingly correlated with real yields in recent years, tending to widen when real yields climb.

Highly indebted companies are sensitive to changes in real yields, Reid argued, because they offer a better indication than nominal yields of how sustainable a corporate debt load is.

Real yields in the US sank to all-time lows in 2021 as investors, rattled by the surge in inflation, poured a record $70bn into funds holding inflation-protected government bonds, or Tips, over the course of the year, according to data from EPFR.

Some analysts also attributed part of the move in real yields in 2021 to limited supply: the Fed, through its quantitative easing programme, has been buying $6.5bn of Tips a month, limiting the availability of the bonds for ordinary investors.

The central bank owns roughly 22 per cent of Tips outstanding, up from 9 per cent at the beginning of 2020.

With Fed purchases slowing and set to end in the months ahead, Tips prices are likely to slide, pushing up real yields, according to Sam Lynton-Brown, head of developed markets strategy at BNP Paribas.

That could exacerbate the move higher in real yields.

“You’re effectively talking about financing costs going up for the entire economy,” said Antoine Bouvet, a rates strategist at ING. “Unless people are getting much more optimistic about growth, that’s a worry for risk assets.”

For tech companies and groups that went public only recently, the declines have been worse

This website uses cookies to improve your experience while you navigate through the website. Out of these, the cookies that are categorized as necessary are stored on your browser as they are essential for the working of basic functionalities of the website. We also use third-party cookies that help us analyze and understand how you use this website. These cookies will be stored in your browser only with your consent. You also have the option to opt-out of these cookies. But opting out of some of these cookies may affect your browsing experience.
Necessary Sempre abilitato

Performance cookies are used to understand and analyze the key performance indexes of the website which helps in delivering a better user experience for the visitors.

Analytical cookies are used to understand how visitors interact with the website. These cookies help provide information on metrics the number of visitors, bounce rate, traffic source, etc.

Advertisement cookies are used to provide visitors with relevant ads and marketing campaigns. These cookies track visitors across websites and collect information to provide customized ads.

Other uncategorized cookies are those that are being analyzed and have not been classified into a category as yet.